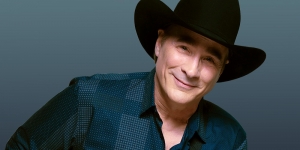 It has been three decades since the release of Clint Black’s groundbreaking debut album, Killin’ Time. The genre altering record cemented the Country music icon as one of the truest traditionalists in the game and his widespread influence can still be felt in the works of artists today. Now, the seemingly unstoppable legend is set to release his incredible 12th studio album, Out of Sane, dropping on June 19th. The record, self-produced by Black, not only stays true to sounds that birthed Country music but also progresses the genre to today’s sensibilities.

Originating from Flint, Michigan in 1969, this top selling American rock group of the 70's is "COMIN' TO YOUR TOWN TO HELP YOU PARTY IT DOWN".  Grand Funk Railroad is extremely excited to be touring in 2022 marking a 53 year milestone. After playing to millions of fans on the band's tours from 1996 to 2021, Grand Funk's 2022 SOME KIND OF WONDERFUL TOUR will continue to reach both new and long-time fans.

Known as "The American Band", the high-energy five-piece group will play forty shows all over the USA this year. Grand Funk Railroad includes original founding members Don Brewer (vocals and drums, writer and singer of the multi-million selling hit, We're An American Band) and bassist Mel Schacher, "The God Of Thunder". Joining Don and Mel are true "All Stars". Singer Max Carl is a rock veteran from 38 Special. Max penned and sang 38's biggest hit "Second Chance" and was co-founder of California's legendary Jack Mack and the Heart Attack. Don refers to Max as "the best blue-eyed soul singer on the planet". Lead guitarist Bruce Kulick is best known for his 12 years with KISS and has credits with Michael Bolton, Meatloaf and Billy Squier. (KISS members Gene Simmons and Paul Stanley were influenced early on by Grand Funk.) Keyboardist Tim Cashion has a master's degree in music from the University of Miami. Affectionately called "Dr. Tim", his credits include stints with Bob Seger and the Silver Bullet Band and English soul man Robert Palmer. Read Bio

Jefferson Starship is one of the most successful arena rock groups of the 1970s and 80s, earning 3 platinum and 8 gold records, as well as numerous Top 40 singles. While Jefferson Starship continues to tour today, the band has experienced numerous lineup and personnel changes, and each of those members have contributed to the magic and alchemy that make Jefferson Starship iconic. Read Bio